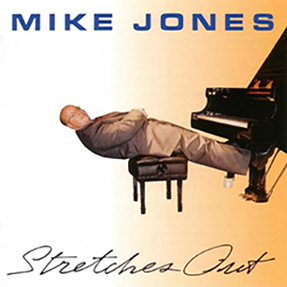 Stretches Out, 2002 on Chiaroscuro Records

Even if pianist Mike Jones provided nothing but the keyboard virtuosity for which he is developing a national reputation, he would be well worth hearing. But Jones brings much more to this tour de force recording, which places him in a league with such superior solo pianists as Dick Hyman and Dave McKenna.Like them, Jones approaches the keyboard as if it were a jazz band, simultaneously unfurling walking bass lines, exquisite innter voices and running top notes that would seem to require four hands rather than two. Better yet, the beauty of Jones’ touch, the wit of his phrasing and the intelligence of his improvisations ennoble such standards as “I Can’t Give You Anything but Love,” “Gone With the Wind” and “Stars Fell on Alabama.” When Jones plays a melody as written, you practically can hear the lyrics; when he improvises freely on it, you wonder why the composer didn’t think of these riffs. “Stretches Out” represents an aural feast.
Howard Reich,Chicago Tribune